MyPR: Contending with Predators in the coral reef!: 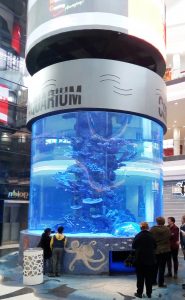 Coral reefs – similar to those found at the CrestAquarium – are highly complex ecosystems. Although they make up less than one percent of the surface area of the world’s oceans, they are home to 25 percent of all marine fish species as well as a fascinating collection of algae and invertebrates.

Because a large portion of the inhabitants are wily predators, the extremely colourful fish that you will see in the likes of the CrestAquarium have developed some fascinating specialisations and ingenious ways of surviving. Many are known as ray-finned fishes and have sharp, bony rays and spines in their fins to defend themselves. Some are extremely venomous.

Many reef fish have also evolved cryptic coloration to confuse predators. Smaller fish protect themselves by hiding in reef crevices or by shoaling and schooling. This way, with every member on the lookout, it’s easier to spot a predator. Schooling fish also put on remarkable displays of precise choreography to confuse predators. Special pressure sensors along their sides enable them to feel each other’s movements and stay synchronized!

The only problem is that predators are often as clever and well adapted as the fish they are hunting and for them; every reef is essentially a great seafood restaurant!

For example, red and blue striped snappers have mouths that are well adapted to eat almost anything, especially smaller fish and crustaceans. Goatfish have long chemosensory barbels or whiskers on their chins to rifle through the sediments for meals that includes everything, from worms and crustaceans to molluscs and other small invertebrates.

Moray eels and coral groupers like to dine together and school in harems of three to fifteen females while surgeonfish and cardinalfish move around the reef feeding on tiny zooplankton. These foraging fish are, in turn, eaten by larger fish, such as the bigeye trevally. These reef diners also school and tend to patrol reefs in hunting packs, surrounding groups of forage fish and herding them close to reefs and when these fish panic, the trevally attack.

Barracuda, with their razor sharp, conical teeth are some of the reef’s most ferocious predators. These fast swimmers patrol the outer reef in large schools.

Equally fearsome predators are the reef sharks which include the whitetip, blacktip and grey reef shark. They are fast-swimming, agile predators that feed primarily on free-swimming bony fishes and cephalopods. The whitetip reef shark lurks round coral heads and ledges or skulks around sandy flats, in lagoons, or near drop-offs to deeper water. They swim relatively close to the bottom and often spend most of their daytime resting inside caves.

The whitetip reef shark is highly responsive to olfactory and electrical cues as well as sounds from potential prey. They hunt primarily at night when many fishes are asleep and can be easily taken.

For more information about our colourful reef dwellers, head to Cresta Shopping Centre.

Did you know this about Johannesburg? In 1964 the Johannesburg Botanical Garden was established in the suburb of Emmarentia. The Emmarentia Dam forms part of the Garden. The Garden is best known for its roses.

Health Tips That Will Help You Reduce Your Pms Symptoms
Next Post: Act of Kindness