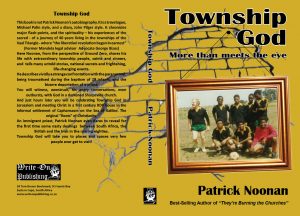 The Vaal will be stirred into awareness of its own heritage on Saturday, 21 September 2019 at 13:00 as they meet renowned author Patrick Noonan as he launches another book at African Flavour Book store, Vanderbijlpark.

This is set to be a flaming hit after the sensational SAfm bestseller, They’re Burning The Churches.

“The reason for writing books about the Vaal is that this area has an amazing, exciting history that changed South Africa,” says Noonan. ‘’By writing down these stories it’s my way of processing what happened to me too,’’ he concludes.

Township Gods is a series of short stories that encapsulate Noonan’s life as a church minister during a period when 23 church ministers were arrested for anti-apartheid activities.

Besides bringing the reader on a roller-coaster journey through Palestine, Lesotho and Ireland, Noonan dares to reveal for the first time, secret dealings between right-wing South Africans, the British and certain Irish groups, in the 80s, when the Vaal townships were burning.

Living in these townships for 40 years which included his arrest and trial during the uprisings of the hot era, he vividly describes paranormal experiences, the work of the Vaal Minister Solidarity Group, Dimpimpi, the voices of ordinary people, rape rage, God and so much more.

Readers have been waiting a long time for this book

“You do not read the book – the book reads you”. unknown.

Did you know this about Johannesburg? There’s a Johannesburg in California: Named in honour the gold miners who worked in Johannesburg, the town has approximately 172 inhabitants.

President to meet leadership of police
Next Post: 189 arrested for public violence, malicious damage to property