MyPR: No one beat Anita for the Renault Kwid!: 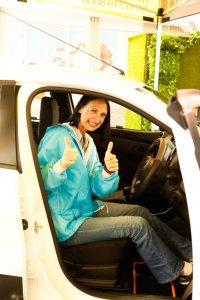 In December, Randridge Mall wrapped up their festive shopping with a bang.

The festive season shopping promotion was a fun filled experience and included cash prizes for shoppers during “money grabbing time”, selfie booths, matching games as well as a chance to win the ultimate prize of a brand new Renault Kwid valued at over R140 000.

Recently, Randridge Mall hosted an all day event, which included a market day, featuring an arts and crafts zone, live entertainment, kid’s activities, artisan food and a beer garden, as well as the prize vehicle draw, which was won by local police officer, Anita Human as well as R10 000 in shopping vouchers.

She was in tears when she heard that she had won a car! “To win R10 000 to shop as well as a car is just inconceivable. It will give me the chance to teach my daughter how to drive. This was actually perfect timing as she is about to do her learners license exam – and all I had to do was buy a pair of pants from Mojo’s!” she explained.

Lucille Budha, Portfolio Manager from Randridge Mall who was on hand to announce the big win added that the prize was well deserved. She said she was delighted for Human and her family.

“Congratulations Anita! We hope you and your daughter enjoy driving around in your new car as well as shopping at Randridge Mall on us!” she added.

Did you know this about Johannesburg? A census was conducted in January 1896 recorded that Johannesburg then had 102 078 inhabitants, of whom 61 292 lived within the three mile radius of Market Square and 40 786 outside. There were 50 907 Europeans or Whites, 952 Malays, 4 807 Asiatics, 2 879 mixed or other races and 42 533 Natives of whom 14 195 lived within the three mile radius and 28 838 outside. Of the 24 489 Whites born in Europe, 12 389 were from England and Wales, 997 from Ireland and 2 879 from Scotland. Of the 24 500 Europeans born in Africa, 6 205 were born in the Transvaal and 15 162 in the Cape Colony. New suburbs included: Klipfontein, Forest Town, Hillbrow, Berea, Yeoville, Bellevue, Houghton, Vrededorp, Paarl’s Hoop, Robinson, Ophirton, La Rochelle, Rosettenville, Klipriviersberg, City & Suburban, Doornfontein, Bertrams, Lorentzville and Troyeville. It was also recorded that there was a Malay Camp, Brickfields, a Coolie Location and a Kafir Location. Kliptown is the oldest Black residential district of Johannesburg and was first laid out in 1891 on land which formed part of Klipspruit farm.