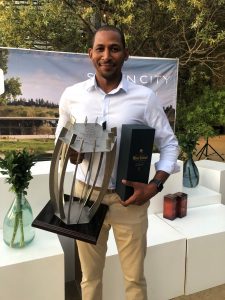 November 2019, Johannesburg:Steyn City celebrated the fifth edition of its annual Golf Challenge with a day full of high spirits and equally high competitiveness.

This year, the usual four teams (Team Cricket, Team Media, Team Steyn City and Team Rugby) were joined by an additional two squads: Ladies and Team Soccer. With more talent in the mix, there was even more excitement.

“We wanted to take this annual event to the next level and make it even more memorable. The introduction of Team Soccer seemed an obvious step, as this is such a well-loved sport in South Africa, while the inclusion of a Ladies’ team was particularly important for us. After all, Steyn City is working hard to promote women’s golf and make the sport more accessible for female players,” explains Kevin Eden, Golf Operations Manager.

Prizes were sponsored by Johnny Walker and a new trophy designed so that the club can record previous years’ team winners on the plaque.

“This is always such a fun event on the Steyn City calendar – we love to show off our golf course, while enjoying the glamour our celebrity sportspeople bring to the parkland,” says Giuseppe Plumari, CEO of Steyn City Properties.

Did you know this about Johannesburg? Ponte City is a skyscraper in the Berea neighbourhood, just next to Hillbrow. It was built in 1975 to a height of 173 m (567.6 ft), making it the tallest residential skyscraper in Africa.