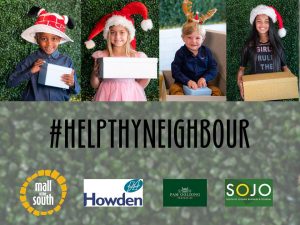 #HelpThyNeighbour is back this festive season to reach out to the Rossentenville community.

The #HelpThyNeighbour forum, which includes: Howden Africa, Mall of the South, Pam Golding Properties Alberton and Johannesburg South and Sojo (South of Johannesburg Business and Tourism) are spreading the festive cheer to the St Mary’s Children’s Home.

St Mary’s Children’s Home is a registered non-profit organisation that provides a safe, secure home and therapeutic environment for children from families in crisis. The Home also offers residential care for over 50 children between the ages of one and 22 years-old, as well as reconstruction and reunification of families wherever possible.

The #HelpThyNeighbour team has pledged to grant a festive gift for every precious child as well as collect non-perishable foods, toiletries, stationery and cleaning materials for the Home.
The donated items can be added in the #HelpThyNeighbour Donation Box, which is located at Mall of the South on Level 0, near Entrance 2.

Did you know this about Johannesburg? Where Johannesburg got it’s name from: The fledgling town of Johannesburg was laid out on a triangular wedge of “uitvalgrond” (area excluded when the farms were surveyed) named Randjeslaagte, situated between the farms Doornfontein to the east, Braamfontein to the west and Turffontein to the south. The property belonged to the government. The Surveyor-General of the ZAR issued an instruction that the farm be surveyed as a township, consisting of 600 stands measuring fifty feet by fifty feet. The first auction of stands took place on 8 December 1886. The settlement was named after two officials of the Zuid-Afrikaansche Republiek (ZAR), Christiaan Johannes Joubert and Johannes Rissik, who both worked in land surveying and mapping. The two men combined the name they shared, adding ‘burg’, the archaic Afrikaans word for ‘fortified city’.

Accused in Chinese factory case remanded in custody
Next Post: 12 Bucket List Destinations to Visit in Africa Before Age 40